When we think of flowers, we’re lulled mostly by their beautiful appearance and delightful smell. These characteristics are made to attract and lure in pollinators, such as bees. However, not every potential pollinator is charmed by a sweet fragrance. Some plants actually give off specialized scents to attract some of nature’s less dainty insects. Flies, for instance, make effective pollinators just like bees do — except that, flies aren’t attracted to sweet smells. They love a funkier stench. And nature’s evolved to provide a range of stinky flowers for them to delight from. Some gardeners have also grown fond of these offensively smelly flowers for their attractive uniqueness. If you’d like to grow these flowers in your garden, just make sure you know what you are getting yourself into. Here’s our list of the renowned stinky blooms.

The largest flower in the world, the stinking corpse lily (Rafflesia Arnoldii), may look beautiful, but stinks of rotting flesh and death when in bloom. This flower is It is native to the rainforests of Western Sumatra and Borneo. It can grow up to 3 feet tall and has a diameter of 1 foot. When it blooms, it attracts flies that pollinate the plant by spreading its pollen from one flower to another.

This plant is known as a parasite because it cannot produce any of its own food. Instead, it attaches itself to a host tree and taps into the tree’s nutrients through a root-like structure called a haustorium.

Titan arum is a plant that has been nicknamed the “corpse flower” for its unusual shape. It is native to Indonesia, but can also be found in parts of the United States. The Titan arum has made headlines in recent years as it bloomed in botanical gardens, such as the United States Botanic Garden in Washington D.C. The Titan arum is not your average flower; it can take up to 10 years for one to bloom and when it does, it smells like rotten dead animal flesh and attracts pollinators like flies with its powerful odour.

The Titan arum is a plant that can grow up to 10-12 feet tall in the wild, and has a flower that can reach over 8 feet in height. However, in confined environments like a botanical garden, the Titan arum flowers are usually closer to between 6-8 feet tall, with the flower measuring more like 3 feet wide. Since it’s not a flower that you’d particularly want to grow in your garden, if one blooms at a botanical garden near you, try not to miss the chance to see—and smell—the rare corpse flower.

The Voodoo Lily, also known as the common dracunculus, dragon lily, dragon arum, black arum and vampire lily, similar to the other flowers on this list, gives off the scent of a decaying corpse when in bloom. However, the stench will only persist for about a day.

The flower looks similar to a giant calla lily with a dark purple bract similar to a leaf that wraps itself around the flower itself which is a fleshy dark purple, almost black, spire covered in tiny flowers.This herbaceous perennial is endemic to the Balkans, extending to Greece, Crete, and the Aegean Islands, and also to the south-western parts of Anatolia.

Unlike other stinking flowers, the obnoxious smell of the Stinking Iris is derived from its leaves rather than the flower. Some people find the smell of its leaves unpleasant when crushed or bruised, an odour that has been described as “beefy”.

Its common names of ‘gladdon’ and ‘gladwyn’ or ‘gladwin’, are in reference to an old word for a sword, (Latin ‘gladius’) due to the shape of the irises leaves, which are tufts of dark green leaves.

The flowers have petals with delicate veining and are usually of a livid (blue-gray) colour, or dull buff-yellow variegated with blue. Its blooming is between June and July, but the flowers only last a day or so. The green seed capsules, however, remain attached to the plant throughout the winter and the seeds are scarlet.

The stinking iris grows naturally in Western Europe, including England (south of Durham) and also Ireland, and France – south and east – to North Africa, Italy and Greece.

Fritillaria imperialis ‘The Premier’ are really quite attractive flowers in the garden. They aren’t as stinky as the more offensive ones in this list, but the flowers contain large drops of nectar and have a rather distinctive musk-like odor which some people may not like.

This plants grows up quite tall up to 40-44 inches (100-110 cm), blooms in mid to late spring and lasts for 2-3 weeks. With proper care, they will often continue to flower year after year in the same spot.

They are also deer and rabbit resistant which makes them great additions to the garden if you mind the distinct smell.

While orchids are renowned for producing amazing, intricate and delicate blooms. But the Bulbophyllum Phalaenopsis is one such orchid that has bizarre and unique flowers. Despite its stench, many enthusiasts love to add them to their collection of houseplants for its unusual look and weirdness.

True to its name, although not a true cabbage, this flower gives off the smell of roadkill skunk when in bloom. It grows naturally in the wetland soils of eastern North America, and similar to the other stinking flowers, lures in flies and stoneflies for pollination. One fascinating characteristic of this plant is that it is capable of generating its own internal heat of 15-35 degrees C (55-95 F) allowing it to thaw and grow through frozen soil and melting snow. The heat may also help them spread the odour of their flowers and attract early spring pollinators which come to eat and take refuge in the flower structure.

If you can stomach it, the plant is also known to have medicinal properties, and has been used for the treatment of asthma, epilepsy, coughs and rheumatism. 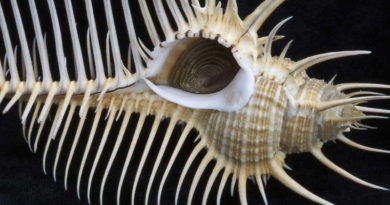 Nature’s most beautiful and intricate seashells