Turbo petholatus (common name: tapestry turban) is a species of sea snail, marine gastropod mollusk in the family Turbinidae. The length of the shell varies between 30 mm and 100 mm. This species occurs in the Red Sea and in the Indian Ocean off Madagascar, Mozambique, Chagos and Mauritius; also in the West Pacific and from Western Australia to southern Queensland

The Venus comb murex, scientific name Murex pecten, is a species of large predatory sea snail, a marine gastropod mollusk in the family Muricidae, the rock snails or murex snails. The shell of this Indo-Pacific species has a very long siphonal canal, and numerous spines. This species is native to Indo-Pacific waters. Venus Comb Murex are predators, eating other mollusks. In turn, they can be food for large bottom-feeding fish such as stingrays and some sharks. Their sharp, long spines, however, may ward off those large predators.

Rostellariella martinii, common name the Martini’s tibia, is a species of sea snail, a marine gastropod mollusk in the family Rostellariidae within the Stromboidea, the true conchs and their allies. The size of the shell varies between 50 mm and 200 mm. This marine species occurs between Taiwan and Borneo.

Aliger gigas, originally known as Strombus gigas or more recently as Lobatus gigas, commonly known as the queen conch, is a large marine snail that lives in the Caribbean Sea and adjacent waters and is one of the most valuable fishery resources for every country throughout its range. Reaching its maximum length of approximately one foot (30 cm) in three to five years, the queen conch spends its growth resources thickening its shell, rather than increasing its size, for the remainder of its life.

The Tent Olive, Oliva porphyria (Linnaeus, 1758), is a member of the Olividae Family of Olive Shells that is also known as the Camp Olive and in Mexico as oliva veteada. The shells have six whorls, a concave to straight sided and sharply pointed spire and an aperture that has an inside lip marked with fine grooves. They are found in the coastal region of the southern Sea of Cortez, from, Loreto to Cabo San Lucas, Baja California Sur and south to Peru, including the Galapagos Islands.

Nautilus are Cephalopods in a group including the squid, octopus and cuttlefish. Cephalopods are the most highly evolved mollusks. They have a well developed nervous system and highly developed eyes. Nautilus are considered living fossils because they have been traced back 500 million years. These mollusks are carnivorous preying on lobsters, crabs and hermit crabs. They also scavenge the bottom of the ocean for tasty tidbits. Now they are found alive in the southwestern Pacific. Dead nautilus shells float as far away as East Africa and Japan. They are most common in the central Philippines.

The angelic Miyoko Murex or Chicoreus Miyokoae seashell is one of the most beautiful types of shells in the world.This particular type of shell can be found in the Central Visayas region of the Philippines and the Solomon Islands.

Mitra mitra, common name the episcopal miter, is a species of large predatory sea snail, a marine gastropod mollusk in the family Mitridae, the miters. Widespread in the Indo-Pacific, from East Africa, including Madagascar and the Red Sea, to eastern Polynesia. North to southern Japan, Wake Island and Hawaii, and south to Australia. This species lives in intertidal and sublittoral zones, to a depth of around 80 m. Mitra mitra is known to be carnivorous, an active predator that feeds on smaller gastropods and bivalves.

Lambis scorpius, common name the scorpion conch or scorpion spider conch, is found in the tropical Indo Pacific region and is very unique. It obviously gets its name due to the fact that it looks like a scorpion. Great focal pieces and look great in aquariums too! The size of an adult shell varies between 95 mm and 220 mm.

This shell belongs to a marine mollusc, or sea snail. Their attractive shells are prized by collectors for their porcelain-like texture. This one is named for its peculiar eye-spot pattern. What made cowrie shells so valuable? Because the shells were small, portable, and durable, they served as excellent currency and were almost impossible to counterfeit, appearing in standard weights. King Gezo of Dahomey, now modern Benin, said he preferred cowries to gold for this reason, he would always receive a fair price.

Epitonium scalare, common name the precious wentletrap, is a predatory or ectoparasitic species of marine gastropod with an operculum, in the family Epitoniidae, the wentletraps. In the 17th and 18th century this was once considered to be a very rare shell and specimens changed hands for large sums of money. Johan de la Faille and Cosimo III de’ Medici owned a wentletrap. This species is distributed in the Red Sea, in the Indian Ocean along Madagascar and South Africa, in the South West Pacific Ocean and along Fiji Islands and Japan.

One of the most beautiful sea shells, the Perisserosa guttata, common name the drop-covered cowry, is a species of sea snail, a marine gastropod mollusk in the family Cypraeidae, the cowries. From the island of Siquijor in the Philippines. This marine species occurs in the South China Sea; off Japan, the Philippines, Melanesia and Australia (Queensland).

Callistocypraea aurantium, (formerly classified inside genus lyncina) common name the golden cowrie, is a species of sea snail, a cowry, a marine gastropod mollusk in the family Cypraeidae, the cowries. The Golden Cowrie (Lyncina aurantium) is one of these; an exotic and rare shell that instantly enchanted Europeans three hundred years ago when the first specimens were brought from the tropical Pacific Ocean with Captain Cook in July 1775.

Conus Textile are one of the most venomous creatures on earth. Among the most toxic are the textile, geographic, and tulip snails and there is a higher risk of death if the geographic and textile snails are involved. All capture their prey by means of harpoon-like hollow teeth (radula) that are rapidly jabbed into their prey to inject the toxic venom. Attacks on humans usually occur when a cone snail is either stepped on in the ocean or picked up from the water or the beach.

Conus gloriamaris, common name the Glory of the Sea Cone, is a species of sea snail, a marine gastropod mollusk in the family Conidae, the cone snails, cone shells or cones. It is commonly found in the Pacific and Indian Oceans. The reason for the rarity is due to the animal’s habitat, which is deep on the sandy sea floor near the Philippines and Indonesia. In the 18th century, a conus gloriamaris sold for three times the price paid the same year for Vermeer’s now-priceless painting, Woman in Blue Reading a Letter. 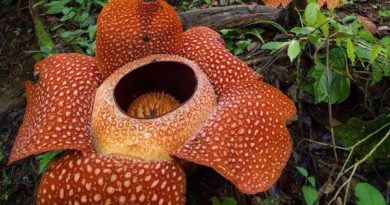 Most stinky flowers in the world